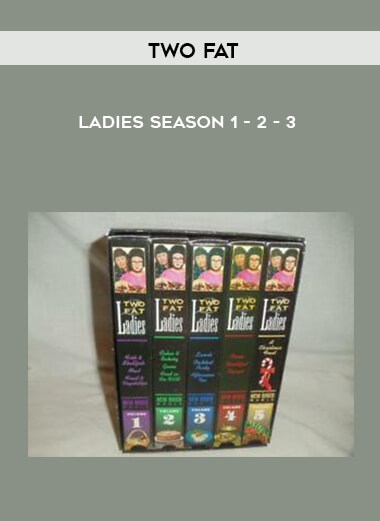 As the two outspoken, outsized women of the title, Jennifer Paterson and Clarissa Dickson Wright serve up funny, frank opinions along with delectable dishes. Traveling all over Great Britain in a classic motorcycle and sidecar, they prepare meals for a wide assortment of peoplecalories, cholesterol, and political correctness be damned. This funny, irreverent show was a viewer favorite on public television and the food Network in the late 1990s, with bestselling cookbooks to boot. The first U.S. DVD release contains all 24 episodes of the complete series.

Vegetarians and the faint of heart, beware! But for everyone else, the Two Fat Ladies are back, and they are simply spectacular. In this British television series, Jennifer Paterson and Clarissa Dickson Wright cook for lunch, cocktail party, afternoon tea, picnic, breakfast, or dinner and travel (by motorcycle and sidecar) to a different location in each episode to cook a requested meal–usually laden with cream, butter, and meats (Jennifer notes of one tartine: “Delicious, despite its vegetarian overtones”). Yes, this is a cooking show, but with Jennifer and Clarissa’s patter, it has the feel of a comedy. As they whip up Loin of Pork Stuffed with Mushrooms and a pot of Clam Chowder, the Two Fat Ladies sing the praises of bacon (Clarissa hints at a risqué past when she notes that bacon is a great hangover cure; not that she gets hangovers anymore. Other allusions to falling off barstools and beer for breakfast are dotted throughout). The meals look sumptuous–salmon soaked in wine and topped with orange rings, Brazilian bean fritters, fruit tartlets, vichyssoise, and so much more–and it’s terrific fun following the women as they go sightseeing (a motorcycle rally, watching a male choir, on a quest for the perfect drink at the Brazilian embassy, at a brewery, picking strawberries). Jennifer is likely to break out in song or rhyme, and Clarissa tells interesting facts and gossip from her life. They chitchat about tips for picking up men, the fact that nutmeg is a hallucinogenic, the beauty of British military boys, how you can’t get crackling in Scotland or France. So, be prepared to learn how to core a kidney (and who knew kidneys needed coring?), make cracker crumbs, and laugh along at the antics of these two rather large women. The Two Fat Ladies are destined to become a cooking classic. The four-season, 24-episode DVD set includes biographies of Paterson and Wright, a documentary tribute to Paterson, and a recipe booklet. —Jenny Brown

Be the first to review “Two Fat – Ladies season 1 – 2 – 3” Cancel reply
Digital Delivery
We are using Paypal for our auto-payment gateway.
If you have any difficulty in settle your payment with us, please contact our Customer Service team via:
Skype: [email protected] (Intell Centre Customer Services)
Email: [email protected]
Facebook: https://www.facebook.com/IntellCentre/