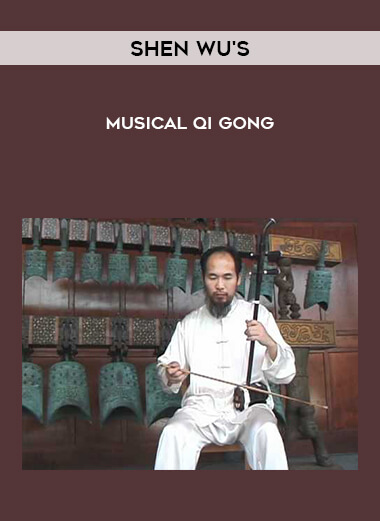 Musical qigong is a special healing energy therapy that combines two ancient Chinese traditions-healing music and qigong. Focusing on the five major organs, this method enlivens the mind, relaxes the body, and lifts the spirit, while enhancing one’s healing energy. This guide contains two complete sets of exercises with photo illustrations and discusses how musical qigong is related to acupuncture, tai chi, feng shui, and the five elements in the ancient Chinese concept of the universe-metal, wood, water, fire, and earth.

…Miraculous and inspirational … Your therapy brings much hope especially to those who have exhausted all the recommended medical options. — Vicky T. Cayetano, First Lady of Hawaii

Your unique treatment for pain control and healing is miraculous and inspirational … — Vicky T. Cayetano, First Lady of Hawaii

Master Shen Wu has treated thousands of patients since he came to the United States in mid 1990s. These people, coming from all parts of the world, range from chronic pain sufferers to terminal cancer patients. Here you will see some cases and hear what the patients have said about Master Wu and his Musical Qigong treatment.

Mrs. Artreis Dobbins had chemotherapy and radiation for lung cancer in 1997, was discovered to have brain cancer in 1998, and was diagnosed to have 3 tumors in 1999. She had been receiving Master Wu¡¯s treatment regularly each week since March 1999. Her general condition had improved a great deal. She no longer complained of pain, slept better, and had a good appetite. She also began socializing and going places again.

¡°Ms. Dobbins was seen in my office. She has undergone extensive work up. She has had a bone scan on June 11 which showed abnormal uptake in the left lower ribs, right ribs and right femoral neck. CT scan of the chest showed a comma-shaped density and questionable cavitary lesion. MRI brain in May 1999 showed marked improvement in the tumor in the brain in the right frontal masses to be proved. At the present time, she has elected not to have any chemotherapy. She is to continue her care with you (Master Wu).¡±

The first MRI report on Mrs. Dobbins showed two tumors had disappeared. It was May 1999. The second MRI taken in September 1999 showed that a small area of edema in the right frontal lobe was significantly smaller than previous study. No pathologic contrast enhancement was identified. No new pathology was noted in the interval.

What Master Wu has done for me cannot be explained in words. It can only be felt within … and then, by the outside result, one can see for themselves the ‘gift of the man.’ Master Wu is truly a uniquely, gifted man and has been blessed with many talents. His is a purpose not understood by many, yet hoped for by all. Not only did he share with me the ‘Gift of Healing, but he also shared a rare kind of wisdom that was stored not by the mind but within each minute particle of my being. I felt it deeper with each treatment that I had. It was a gift that was given with a pure heart and a noble spirit.

After a long journey and much intense work, it was a joy for me to find someone who truly cared for me as an individual and shared his gift of energy therapy with such tenacity, kindness and love. ‘The gift of healing that was given unto me through Master Wu is, and continues to be, a ‘Blessing Fulfilled as each day passes.

Rare is the man who gives without expecting a thing in return but a smile upon the face of the one who graces his domain. Master Wu is such a man. And as they say, behind every great man stands an honorable woman. Together, the combination of the two touches lives in such a way that one shall never remain the same but will move forward in newness, health and growth. That’s the way you feel after having met and spent time with Master Wu.

Master Wu is to be commended for his contribution not only to each of us individually, but to all mankind.

My highest regards to Master Wu for being a healer of such great magnitude and a teacher to be proud of. He is one of the few who lives his truth and for that, he continues to be Blessed in all that he does and through those whose lives he touches.

Eliza Mao is a registered nurse who had worked for the Federal Government for more than 11 years. She went to see Master Wu for an alternative treatment after all conventional treatments had failed for her liver disease.

¡°I found myself getting stronger physically and better emotionally each day, and practice Qigong daily and realize how important Qigong is to human body. I decided to follow Master Wu¡¯s foot step to teach people the theory and exercise of Qigong, to bring back good health to people.¡±

Eliza left her government job in California and relocated to Florida in September 1997, to work on trial program of cancer pain control with Dr. N. Finkler (center) and Master Wu.

I am writing this letter as a reference to Master Shen Wu’s special ability to treat patients. My name is Wesley Kwan, I am registered pharmacist in the state of Florida and state of Maryland. My 4 year-old son, Victor, went to a routine physical exam and found out that his urine contained blood and protein and he has been diagnosed with a kidney infection. Under strong recommendation, we decided to let him try Master When Wu’s “Qi Treatment.” He treats him with ” Qi Treatment” without giving him any medication. After 5 days we send him to SKB lab to do the test again. Like magic, this time the test result came up all negative.

I have been practicing pharmacy for more than 20 years and I always believe in the trust of Western medicine. This to me is totally unheard of; the only explanation is that Master Wu’s special ability and his “Qi Treatment” are really become a nice alternative and new dimension for health science.

¡°Master Wu has given me a second lease on life.¡±

¡°Master Wu is a remarkable genius in a new field of medicine ¨C use of resonant music coupled with Qigong. I think I have improved sufficiently that I am confident, with the grace of God¡­ I will make it.¡±

¡°The result was extraordinary!¡±

¡°After the workshop, Master Wu gave me two short treatments, which quickly and dramatically reduced the pain in my shoulder, and I was able to resume playing the violin immediately ¡­ I truly appreciate Master Wu¡¯s exceptional gift of healing and I feel privileged and fortunate to have met him.¡±

¡°I would not be alive without Master Wu!¡±

In June 2000, Susan Chang of New Jersey was diagnosed with pancreatic tumor. All of her doctors said that she needed immediate surgery. The news was so devastating to her that she felt her life was over. She was very reluctant to take the surgery, afraid that she might not come out of the operation room alive, and never being able to see her husband and two small children again. She told herself that Master Shen Wu was her only hope.

She came to see Master Wu in July 2000 and after two months¡¯ treatments (without any other kind of therapy), the CT scan and all the tests showed that her tumor had dissolved. Her recovery is truly amazing and she feels that she has been given a second life.

Currently, she is still undergoing treatments. The Qigong exercises, along with listening to the music of Master Wu¡¯s CDs have become a daily ritual for her. She is eternally grateful to Master Wu for his healing power. Without seeking his treatment, Susan Chang feels she would not be alive today.

NOTE: There are about 20 illustrations for this chapter in the book that do not show here.

Shen Wu is the founder of musical qigong and the director of the Chinese Traditional Medical Institute. He is the author of Sound of Dragon and the audio series Life Music for Healing and Musical Qigong Therapeutic Collections. He lives in Orlando, Florida.

Be the first to review “Shen Wu’s – Musical Qi Gong” Cancel reply
Digital Delivery
We are using Paypal for our auto-payment gateway.
If you have any difficulty in settle your payment with us, please contact our Customer Service team via:
Skype: [email protected] (Intell Centre Customer Services)
Email: [email protected]
Facebook: https://www.facebook.com/IntellCentre/