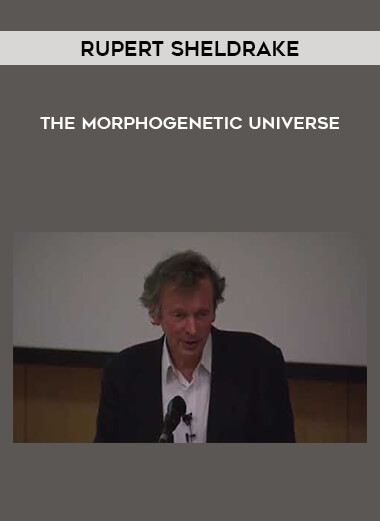 Rupert Sheldrake is a biochemist and plant physiologist. After graduating in biochemistry with double-first-class honours from Cambridge University he won a fellowship to study philosophy and history at Harward University after which he returned to Cambridge where he obtained his Ph.D. in biochemistry.

During his research into plants Sheldrake concluded that “after nine years of intensive study, it became clear to me that biochemistry would not solve the problem of why things have the basic shape they do“. He began to develop his theory of morphic fields which act as information fields to organize the structure of matter.

In this lecture Sheldrake explains his theory and shows various results of experiments which can not be explained through simple genetics. These fields are specific to each species and allow for propagation of learned skills even if the considered test subjects have never been in contact with each, the information transfor works through “morphic resonance”. This would also explain what is known as the “100th monkey” effect.

Another aspect of these morphic fields are extended mind phenomena within social groups for example telepathy between humans, the synchronized behaviour of a flock of birds or telepathy between a human and his dog for which Sheldrake presents a short video of an experiment.

The lecture was conducted on September 22, 2007 at the “Biology of Transformation Conference” in London :

This is a second lecture conducted at Goldsmiths College, University of London on January 20th, 2009. It partly covers similar topics as the first video but particularly focuses on the morphic resonance aspects of “laws of nature as habits of the morphic field”. One way to show the habitual nature is by tracing the history of melting points of various materials produced in the pharmaceutic industry which are supposed to be constant. As Sheldrake shows in this presentation, these “constants” acually are not constant but changed by more than 12 degrees over the last decades :

Be the first to review “Rupert Sheldrake – The Morphogenetic Universe” Cancel reply
Digital Delivery
We are using Paypal for our auto-payment gateway.
If you have any difficulty in settle your payment with us, please contact our Customer Service team via:
Skype: [email protected] (Intell Centre Customer Services)
Email: [email protected]
Facebook: https://www.facebook.com/IntellCentre/