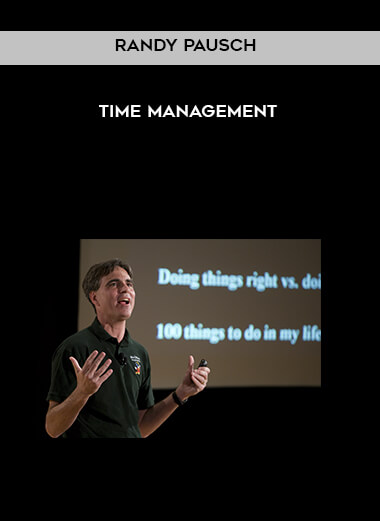 Randolph Frederick “Randy” Pausch, an American computer-science professor at Carnegie Mellon University, virtual-reality pioneer, human-computer interaction researcher, and the co-founder of CMU’s Entertainment Technology Center. He was born on October 23, 1960. When he was 46 Pausch discovered that he had pancreatic cancer, and when he was 47 he have been told that he had 3-6 months life expectancy. A month after Pausch received the news he participated in a speech following an academic tradition called “Last lecture”. After that lecture his address video went viral on the Internet, and was the success behind his best-selling book The Last Lecture later on.

In Time Management lecture, Randy Pausch discussed four main points: how to set goals, how to avoid wasting time, how to deal with a boss, and how to delegate to people; he recommends those four as tools to deal with stress and procrastination. First he started by emphasizing on how people should change the way they see time and start seeing it as a commodity. He suggests that to be able to manage time people have to start with sitting goals, and the way to know your goals is by questioning them. After setting goals comes the plan. “Falling to plan is planning to fail” as Pausch said, he encourages people to plan every day, week, course ahead of them. Even though things might happen and plans could be canceled, he still believes that planning is a good way to manage time. Aside from planning is to have a To-do list, which is splitting tasks into short steps and working on accomplishing them. This makes big tasks easy.

Other important thing that helps managing time is scheduling your self. He mentioned a term in Economy called “Opportunity coast” which means that the opportunity we are having -time- will never be back if we wasted it doing unnecessary task. He encourage people to find their creative time and defend it by not spending it on any other unimportant task or by doing things for others, and on to schedule all the meetings and activities that doesn’t requires to be in full shape at what he called “dead times”. He continues giving examples and ways to organize your working place, mail, and home. He then started listing things that helps to mange time.

Things that I liked and benefited from in his speech where Covey’s four quadrants square which helps making sure that all important takes are done ahead of time, and then unimportant stuff. The second thing I liked is when he said don’t find time; make time by electing not to do something else. As simple as it may sound, it’s what’s happening when I spend most of my time texting or browsing the internet. I would say that 75% of my time is wasted on doing that, when I could control my self, focus on finishing my work, and leave all of that to later on when I’m done. The third thing I liked was when he said learn how to cut time short. It is one of the things that I’ve noticed recently and now working on, I no longer spend time trying to help someone else when I have more important things to do. Last but not least, is when he said make up fake classes, I have breaks that can extend to 4 hours, at those times I could do a lot of work and in result I have more time later when I go back home to spend with my family.