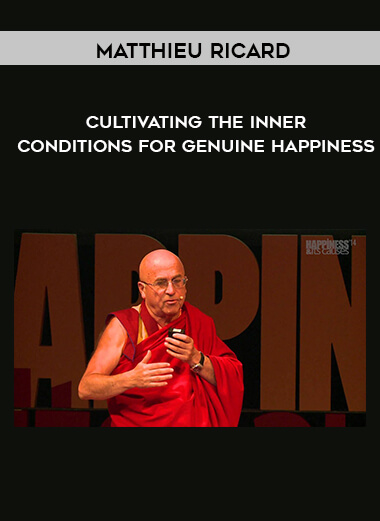 What is happiness and how can we achieve it? Happiness is not limited to a few agreeable sensations, intense pleasure or a burst of joy. Rather, it is a way of being and of experiencing the world; a profound fulfilment that suffuses every instant of life and endures despite the inevitable daily hazards we encounter.

A lack of well-being reflects a fundamental vulnerability to suffering, which ultimately can lead to a sense of self-loathing, a feeling that life is not worth living because we cannot find any meaning in it.

We all seek some kind of happiness and a sense of fulfilment. No one wakes up in the morning thinking, “May I suffer the whole day.” When we engage freely in any long-term activity, we do so in the hope that it will increase our well-being or that of others.

We usually look outside for the causes of happiness. Likewise, when things go wrong, we instinctively search for outer remedies and try to change the conditions to suit ourselves. This often fails as, unfortunately, our control of the outer world is limited, temporary and often illusory.

In fact, it is our mind that translates outer conditions into happiness or suffering, and, even though it may not be easy to transform one’s mind, it is something that lies within the reach of our capacities.

Genuine happiness is being in a deep sense of fulfilment that arises from an exceptionally healthy mind; a way of being that pervades all emotional states, and gives us the inner resources to deal with whatever comes our way.

We know that our state of mind can override outer conditions: in the midst of difficult circumstances, we can preserve one’s inner strength, dignity and peace of mind. On the contrary, we may live in a “little paradise” where all the outer favourable conditions are gathered and yet feel great suffering within.

Thus it is clear, that although outer conditions can considerably influence our well-being, they don’t dictate it. It is indeed highly desirable to enjoy a long and healthy life, freedom and access to knowledge, but it is even more important to identify the inner conditions that lead to genuine well-being and those that destroy it.

For this, we first need to apply insight and mindfulness. Secondly, we must cultivate the states of mind that favour authentic happiness and eliminate the afflictive thoughts and emotions that undermine it. This requires determination and perseverance. The whole process is called “mind training” and it lies at the heart of contemplative science.

Instinctively, we tend to put all our hopes and fears in the outer world. Yet, the universe is not a catalogue for our desires. Our control over the world is limited, temporary and often illusory. Although outer conditions matter and we should improve them as much as possible, it is the mind that translates them into happiness or suffering. In fact, our state of mind constantly overrides outer conditions.

If happiness is the “goal of goals,” we therefore need to identify and cultivate the inner conditions for genuine well-being – altruism, compassion, inner strength, freedom and peace. Simultaneously, we need to gradually phase out from our mind the mental toxins – hatred, craving, mental confusion, arrogance and envy – which destroy our own happiness and that of others.

Happiness is often confused with pleasure. Unlike well-being, the evanescent experience of pleasure depends on particular circumstances, times and places. Pleasurable sensations soon wear out and give rise to indifference and sometimes disgust.

On the contrary, genuine happiness as a “way of being” is less vulnerable to circumstances and becomes more stable and pervasive as we understand and experience it.

Through introspective inquiry we gradually discovers that although some mental processes, such as craving and hostility, may be effective in the short term for acquiring specific objects that have been deemed desirable, or conducive for our survival, they are not conducive to the genuine flourishing of our self and others.

This all depends on whether afflictive emotions are inherent or not to the fundamental nature of mind.

There is a fundamental quality of mind that is present at all times: the basic quality of knowing, of being aware. This basic awareness is needed for the arising of any thought, and remains the basis of every thought that goes through the mind.

It is also clear that craving, hatred and the feeling of self-importance require the presence of pure consciousness to arise, but are not inherent to pure consciousness. Pure consciousness can be compared to a mirror. The mirror allows the arising of images on its surface, ugly or smiling faces, but these images do not belong to the mirror itself and do not penetrate it.

Since craving, hatred, jealousy and other afflictions are not permanent features of the mind, but arise because of transitory causes and circumstances, they can be neutralized and eventually eliminated.

Two diametrically opposed mental states cannot arise at the same time toward the same object. This is the rationale for first discovering the direct opposites of mental afflictions and then cultivating those antidotes.

Thus the more we generate loving kindness in our mind, the less there will be room for hatred in our mental landscape. This is why mental training or familiarization – which is the true meaning of meditation – is crucial for dealing effectively with afflictive emotions as they arise so that they don’t build up into lingering moods and, eventually, afflictive traits or temperament.

There are many other ways to free oneself from afflictive mental states. One may for instance cease to identify with our anger, craving or jealousy, and let the mind look at these emotions as if staring at a burning fire. If one does so, neither suppressing emotions nor letting them invade one’s mind, they will vanish of their own accord, like a fire that dies out.

Meditation is not about sitting quietly in the shade of a tree and relaxing in a moment of respite from the daily grind; it is about familiarizing yourself with a new vision of things, a new way to manage your thoughts, of perceiving people and experiencing the world.

We all experience moments unconditional benevolence, compassion, mindfulness and inner peace. But those are usually fleeting states of mind that are soon replaced by others. But, in the same way that one cannot learn skying or playing a musical instrument by practicing it a few minutes every months, one needs to train our mind regularly.

To cultivate concentration, altruism and other human qualities, one needs to spend time, sitting quietly with a focusing mind, letting for instance altruistic love feel one’s mind over and again, until it truly becomes part of oneself.

Over the last twenty years, neuroscientists have found that the brain is more “plastic” than was long believed, that its circuitry can be changed by outside as well as inside events. It was only in 1998 that neuroscientists discovered that new neurons are continually being generated in the adult brain.

This faculty to change, whether by creating new neuronal connections or reinforcing existing ones, is called brain plasticity. The study of musicians who have played ten thousand hours of their instrument has shown, for instance, that the area of the brain that controls the movement of fingers had been considerably enhanced.

Could mind training directed at increasing mental states such as altruism, compassion, inner calm and patience result in changes of similar magnitude? This is what new research programs are now trying to investigate.

Brain plasticity has long been a focus of Richard Davidson, a prominent neuroscientist at the University of Wisconsin, who has been studying the brain circuitry of emotions for the last two decades. Davidson hopes to learn whether the study of trained meditators can provide insights into the mechanisms of brain function or new therapeutic approaches for psychology.

This collaboration has been catalyzed by the Mind and Life Institute, which was created in the 1980s by Adam Engle and the late neuroscientist Francisco Varela to foster a dialogue between Buddhist scholars and Western scientists. Over fifteen such meetings, each lasting several days, have been held since 1981.

In September 2003, the meetings went public for the first time, with a conference called Investigating the Mind, held at the Massachusetts Institute of Technology and co-sponsored by MIT’s McGovern Institute for Brain Research.

For three days, panels of neuroscientists and Buddhist scholars took the stage with the Dalai Lama before an audience of 1100, mostly scientists, to discuss attention, mental imagery, and emotion. Since then public meeting have been held in a number of places.

Because of advances in brain imaging and other behavioural tests, it has now become possible to learn more precisely and scientifically about those inner workings, and to test meditators’ first-person insights with Western research techniques and to better understand the mental states they achieve through meditation.

Richard Davidson and his collaborator Antoine Lutz have been working with Buddhist meditators who have from 15,000 to 40,000 hours of meditation over 15 to 40 years in order to study the brain activity associated with positive emotions such as “unconditional compassion.”

A few major publications about this fascinating research have appeared in various scientific journals. Similar research is also taking place at Princeton, Zurich and Maastricht.

The purpose of Buddhist contemplatives getting involved in such collaboration is to share a wealth of introspective experience that might helpful for cultivating emotional balance, remedying attention deficit, cultivating authentic well-being and developing human qualities, thus contributing to a better, more compassionate society.

By transforming ourselves, we can gradually change the world.

Matthieu Ricard is a Buddhist monk who lives at the Shechen Monastery in Nepal, where he co-ordinates the Karuna-Shechen Humanitarian Projects. He is well-known photographer and the author of many books, including Happiness: A Guide to Developing Life’s Most Important Skill. He is currently in Australia for the Happiness and Its Causes conference in Brisbane, 16-17 June 2011.

Be the first to review “Matthieu Ricard – Cultivating The Inner Conditions For Genuine Happiness” Cancel reply
Digital Delivery
We are using Paypal for our auto-payment gateway.
If you have any difficulty in settle your payment with us, please contact our Customer Service team via:
Skype: [email protected] (Intell Centre Customer Services)
Email: [email protected]
Facebook: https://www.facebook.com/IntellCentre/

NICABM – How to Foster Post-Traumatic Growth