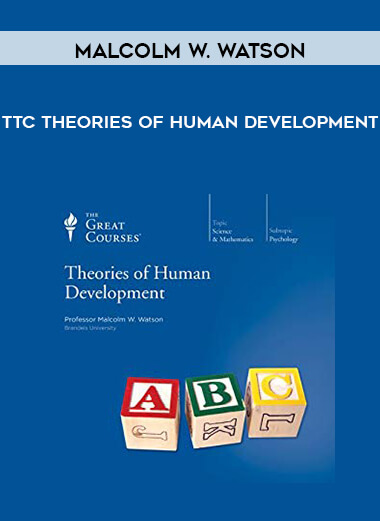 Have you ever wondered where the terms “terrible twos” and “identity crisis” come from?

Did you know that the notion that children are different from adults, and require special care, is only about 200 years old?

Did you know we can trace most of our modern ideas about children to just two renowned thinkers of the 17th and 18th centuries?

These are just a few of the fascinating aspects of the field of “human development”: the science that studies how we learn and develop psychologically, from birth to the end of life. To a large extent, the study of human development is the study of child development, because the most significant changes take place from infancy through adolescence. This very young science not only enables us to understand children and help them develop optimally, but also gives us profound insights into who we are as adults.

In Theories of Human Development, Professor Malcolm W. Watson introduces you to the six theories that have had perhaps the greatest influence on this field. You will meet the people who formulated each theory, become familiar with their philosophical backgrounds and the historical contexts in which they worked, and study the specific processes of human development that each theory describes.

Along the way, you will evaluate the strength and weaknesses of each theory. How do these six great theories complement or contradict one another? What do they tell us, as a whole, about human development?

Six Theories of How We Become Who We Are

The six major theories have had a pervasive impact on the way we, both scientists and the general public, see ourselves. They are:

Sigmund Freud’s Psychodynamic Theory. The lectures discuss this theory, the earliest of the six, including such concepts as the Oedipus Complex and Freud’s five stages of psycho-sexual development. Although now widely disputed, Freudian thinking is deeply imbedded in our culture and constantly influences our view of human nature.

Erik Erikson’s Psycho-Social Theory. This is the theory that gave rise to the term “identity crisis.” Erikson was the first to propose that the “stages” of human development spanned our entire lives, not just childhood. His ideas heavily influenced the study of personality development, especially in adolescence and adulthood.

John Bowlby and Mary Ainsworth’s Integrated Attachment Theory.This was the first theory to focus primarily on the formation of parent-child relationships. It explains the connection between relationships that occur early in our lives and those that happen later, including romantic ones. Attachment theory has generated thousands of scientific studies, and has led to changes in many childcare policies, such as those allowing parents to stay with their children in hospitals.

Albert Bandura’s Social Learning Theory. This theory modified traditional learning theory developed by such behaviorists as B. F. Skinner, which was based on stimulus-response relationships. It considered learning to be no different among infants, children, adults, or even animals. Bandura’s approach is influential in such areas as the effect of media violence on children, and the treatment of problem behaviors and disorders.

Jean Piaget’s Cognitive-Developmental Theory. Piaget’s influence created a revolution in human development theory. He proposed the existence of four major stages, or “periods,” during which children and adolescents master the ability to use symbols and to reason in abstract ways. This has been the most influential of the six major theories. In the 1970s and 1980s, it completely dominated the study of child development.

Lev Vygotsky’s Cognitive-Mediation Theory. Alone among the major theorists, Vygotsky believed that learning came first, and caused development. He theorized that learning is a social process in which teachers, adults, and other children form supportive “scaffolding” on which each child can gradually master new skills. Vygotsky’s views have had a large impact on educators.

To give you the best understanding of these theories, this course also explores the general history of the study of child development. It touches on the work of other important researchers, such as John Watson of Johns Hopkins University, who developed behaviorism, and Arnold Gesell of Yale, from whose work sprang such well-worn phrases as “just going through a stage” and “the terrible twos.”

Professor Watson also discusses the era of observational research on children, which marked the beginnings of child study as a true science. This period was pioneered by scientists who began publishing detailed accounts of the development of their own children. These early “baby biographers” included Alfred Binet, who first developed intelligence testing in France, and even Charles Darwin.

You may be struck not only by how much we have learned about child development, but also by how much our attitudes toward children have changed. Until the beginning of the 19th century, there was no interest in child study and, in fact, no concern for children. Such factors as poverty and high infant mortality created an atmosphere in which children were barely tolerated, or used for labor.

In Paris in 1750, 33 percent of all newborns were left in foundling homes or on doorsteps; most died. In England, boys and girls as young as four were often sent to work in mines.

You will see how attitudes toward children gradually improved, due mostly to the efforts of physicians and religious leaders. And you will appreciate the tremendous contribution that two renowned philosophers, John Locke (1632–1704) and Jean-Jacques Rousseau (1712–1778), have made to the field of child development. Their ideas about children—whether they are inherently good or bad, or whether they actively shape their environments or passively react to stimuli—still form much of the basis of our modern theories.

The lessons of this course are not simply about learning, behavior, and relationships in youth, but at any age. Taken as a whole, they provide our best answers to the questions of human nature—how we learn, adapt, and become who we are at every stage in life.

Be the first to review “Malcolm W. Watson – TTC Theories of Human Development” Cancel reply
Digital Delivery
We are using Paypal for our auto-payment gateway.
If you have any difficulty in settle your payment with us, please contact our Customer Service team via:
Skype: [email protected] (Intell Centre Customer Services)
Email: [email protected]
Facebook: https://www.facebook.com/IntellCentre/