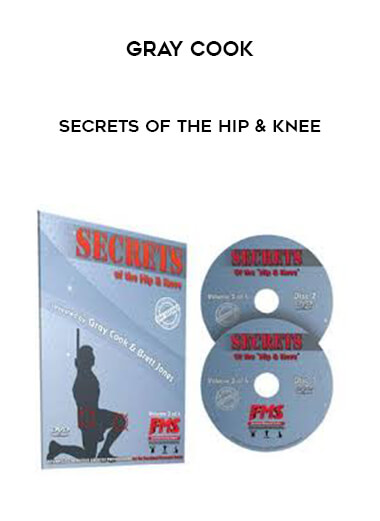 In this 2-disc set, Secrets of the “Hip and Knee”, number two in the Secrets Series consisting of Secrets of the Shoulder, Secrets of Core Training, and Secrets of Primitive Patterns, Gray Cook and Brett Jones teach how to uncover asymmetries that forewarn of future risk of injury. Here’s a breakdown of what you’ll find in this powerful DVD set.

In this discussion, Gray and Brett point out that when talking about the center of all movement people often forget about the hip.  This DVD set includes the hip and knee because the knee ends up getting punished as a result of hip and ankle problems. Brett reveals that there is no such thing as lateral tracking of the patella; it is actually a hip problem.  It is very important that we have strong hips.  As a whole, we are a sedentary population which causes us to lose hip mobility.  Brett reveals and discusses the four secrets of the hip.

There are two ways you should check movement patterns.  You should initially check a movement pattern with a screen, and if you fail the screen you should move to an assessment.  In this section, Gray and Brett screen four of the seven tests from the Functional Movement Screen; the deep squat, hurdle step, in line lunge, and ASLR.

When movement screens do not go well, you must then implement an assessment.  In this DVD, Gray and Brett use the SFMA (Selective Functional Movement Assessment) to break down the movements of the FMS.  First, they look at the toe touch, and then they look at full extension.  For both of these assessments, they look at them in a symmetrical stance first, then a single leg stance.  They look at flexion loaded and unloaded (standing and sitting) which reveals if there is a mobility or stability problem.  Next, they look at the prone press up, then closed chain dorsi flexion.  After they complete these mobility assessments, they do a couple stability assessments, which include the Thomas test and the Faber test.  Although they did not do any “knee tests,” they have revealed a lot of symptoms.  This reinforces their belief that the knee is punished as a result of problems in the hip.

Following the mobility assessment, it is important to perform stability tests.  Gray and Brett look at static and dynamic single leg flexion and extension first.  Next, they look at the push up position with both legs, then single leg, then with the knee flexed.  They look for a lack of stability in the hip during this test.  After the push up test, they do a single leg bridge test.

If you found any problems in the mobility or stability tests, it is necessary to do some serious movement prep.  Gray and Brett go over movement preps for the toe touch, hip extension problems, and ankle dorsiflexion limitations.  They use the stick and the Gray Cook Band in all of these movement preps. It is very important to go back and re-test the area where you found a problem to make sure you are on the right track.

After you work on correcting mobility problems, you have to do stability work. If you do not work on mobility first, the stability exercises will not be effective.  When working on stability, it is important to get the core to fire first.  Gray and Brett show us different exercises which will teach the core to automatically fire.  They perform tall kneeling and half kneeling chops using a Kiser with a cable bar which inhibits the quad and hip flexor and activates the core.  Next, they do an exercise in the push up position using a belt.  In this exercise, they are really working on the eccentrics and assisting them in the concentric phase.  The third core firing exercise they demonstrate is in the bridge position, and the final one utilizes the Kiser in a single leg stance.

This segment teaches us how to build patterns in three different stances, the symmetric stance, the asymmetric stance, and the single leg stance.  For the symmetrical stance, Gray and Brett perform the squat and the dead lift to establish the correct hip hinge pattern.  They teach how to clean up the squat using the Kiser to pull yourself down into the squat.  A Gray Cook band is used to cave the knees in which helps correct a dysfunctional pattern.  Other methods they use when correcting the squat include an exercise where the patient lies on their back with their feet held against resistance, they are instructed to pull themselves into the squat.  Lastly, Gray and Brett use the wall squat to teach someone how to perform the correct hip hinge pattern.

Lunge and Step Up Patterning, 7 minutes

Gray and Brett utilize the asymmetrical and single leg stances to work on lunge and step up patterning.  They start with the lunge pattern.  There are a couple different problems we see in this pattern.  It should not be a quad dominant activity, and the knees should not cave in.  They discuss two different modifications using a toe lift and “ski poles”.  The lunge pattern should be transitioned to the step up pattern using a band.  Gray indicates that it is important to start on your good side to help magnify the asymmetry.  He also says not to coach them through the patterning, but to let them figure it out on their own and feel the mistake first.

When doing single leg deadlift patterning, they use RNT (reactive neuromuscular training) to bring an unconscious mistake to a conscious level.  They begin by using a single leg deadlift pattern to look for asymmetries.  One mistake people often make when doing this pattern is trying to do it stiff legged.  Gray uses tubing on Brett to assist with this patterning.  Gray also instructs Brett to keep weight on his big toe.

Now, it is time to work the movement patterns in function.  When adding weight to these patterns, it is important to work all three foot positions.  Brett demonstrates the Kettlebell front squat and explains the correct technique.  Next, Gray explains the lunge, and then moves on to single leg deadlifts.  These are all demonstrated with the PowerBlock and the Kettlebell.  A reference to Pavel’s “The Naked Warrior” is made in reference to the single leg squat.  Once you work strength, you can add power.  The first exercise they demonstrate is the deep squat push press.  The deep squat is the strength part of this exercise, and the push press incorporates power into this movement.  It is important that we see symmetrical push presses, and that you stay tight through the core.  The push press is demonstrated in a symmetrical stance, asymmetrical stance, and the single leg stance.  Brett also demonstrates the hang clean in all three foot positions.

There are three key exercises that Gray and Brett did not discuss in this DVD series: the deadlift, Kettlebell swings, and the Turkish Get Up.  They didn’t go into detail about these exercises because they are already covered in Secrets of the Shoulder and Secrets of the Backside.  The Kettlebell swing is great when working on the hip hinge.  In the conclusion Brett reminds us that the hip is the center of movement.  If you clean up hip problems, you will clean up knee problems!

Readmore about : Gray Cook - Secrets of the Hip & knee, Secrets of the Hip & knee, functional movement exercises , hip huggers 70s , hip huggers belt
Digital Delivery
We are using Paypal for our auto-payment gateway.
If you have any difficulty in settle your payment with us, please contact our Customer Service team via:
Skype: [email protected] (Intell Centre Customer Services)
Email: [email protected]
Facebook: https://www.facebook.com/IntellCentre/

After receive your order, It will take 0-12 hours to be download available.
The Course is digital products included PDFs,Videos (MP4,TS,AVI files), Audio (MP3,M4A), Document (Word, Exel,Power Point..)
We will provide the download link accordingly with the Email address on your “Order Reciep”.
Product Rating :
4.4 / 5 ( 5 votes )

Dain Heer – Being you. with the Money

Jerry Karzen – Going With the Pattern Is Not Enough