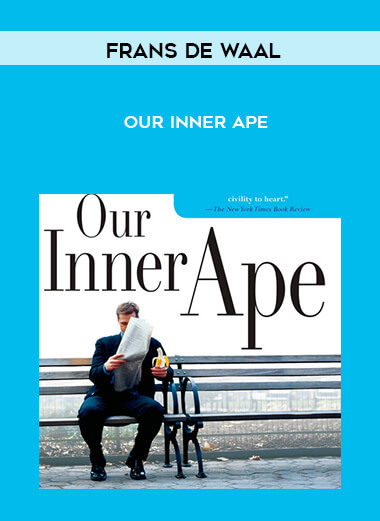 It’s no secret that humans and apes share a host of traits, from the tribal communities we form to our irrepressible curiosity. We have a common ancestor, scientists tell us, so it’s natural that we act alike. But not all of these parallels are so appealing: the chimpanzee, for example, can be as vicious and manipulative as any human.

Yet there’s more to our shared primate heritage than just our violent streak. In Our Inner Ape, Frans de Waal, one of the world’s great primatologists and a renowned expert on social behavior in apes, presents the provocative idea that our noblest qualities—generosity, kindness, altruism—are as much a part of our nature as are our baser instincts. After all, we share them with another primate: the lesser-known bonobo. As genetically similar to man as the chimpanzee, the bonobo has a temperament and a lifestyle vastly different from those of its genetic cousin. Where chimps are aggressive, territorial, and hierarchical, bonobos are gentle, loving, and erotic (sex for bonobos is as much about pleasure and social bonding as it is about reproduction).

While the parallels between chimp brutality and human brutality are easy to see, de Waal suggests that the conciliatory bonobo is just as legitimate a model to study when we explore our primate heritage. He even connects humanity’s desire for fairness and its morality with primate behavior, offering a view of society that contrasts markedly with the caricature people have of Darwinian evolution. It’s plain that our finest qualities run deeper in our DNA than experts have previously thought.

Frans de Waal has spent the last two decades studying our closest primate relations, and his observations of each species in Our Inner Ape encompass the spectrum of human behavior. This is an audacious book, an engrossing discourse that proposes thought-provoking and sometimes shocking connections among chimps, bonobos, and those most paradoxical of apes, human beings.

“Fascinating . . . This important and illuminating book should help our own species take [a] lesson in civility to heart.”—The New York Times Book Review

“[An] excellent book . . . This is a rarity, a superb scientist producing an excellent book for non-specialists . . . De Waal covers [his topic] with great wisdom and subtlety . . . This should be required reading for the opinionated cousins (or better yet, world leaders) whose ancient encounters with Robert Ardrey or Konrad Lorenz have led them to believe what kind of ape we are.”—Nature

“De Waal demonstrates why he is the current Alpha Male of American primatology. Decades of cutting-edge research on apes (and monkeys too) lend vibrancy to his words, and authority to his conclusions”—BookSlut.com

“De Waal offers vivid, often delightful stories of politics, sex, violence and kindness in the ape communities he has studied . . . Readers might be surprised at how much these apes and their stories resonate with their own lives, and may well be left with an urge to spend a few hours watching primates themselves at the local zoo.”—Publishers Weekly (starred review)

“Fascinating and enlightening: It’s hard not to conclude that, in many ways, apes may be wiser than their upright relatives.”—Kirkus Reviews (starred review)

“For more than a quarter-century Dutch primatologist Frans de Waal has been unlocking the uncanny parallels between [chimp] behavior and our own . . . Our Inner Ape is filled with fascinating examples of how human behavior can be explained by our ape ancestors.”—Outside Magazine

“An informative and engaging work.”—Library Journal

“De Waal is perhaps the most literate, entertaining, and soulful of the cognitive ethologists.”—Los Angeles Times

“De Waal is an original thinker and writes with such a light hand that the reader can take a stimulating ride through his imaginative philosophical discourse.”—Boston Globe

“A new book on the human species by de Waal, one of the world’s great experts on primate behavior, is an eagerly awaited publishing event.  By turning his binoculars on the human species, he provides us with a revealing picture of the inner ape—what lies inside each and every one of us.”—Desmond Morris, author of The Naked Ape

“Frans de Waal is uniquely placed to write a book on the duality of human nature and on its biological origins in the other primate species.  No other book has attempted to cover this ground.  Few topics are as timely to the understanding of the human mind and behavior.”—Antonio R. Damasio, author of Descartes’ Error

“One of the important disciplines that is generating new knowledge about human nature is primatology.  Frans de Waal is the best-qualified scientist not just to describe the results of this research, but to draw out a balanced understanding of what it implies about contemporary politics and social policy.”—Francis Fukuyama, author of The End of History and the Last Man

Frans de Waal is a Dutch-born biologist who lives and works in Atlanta, Georgia. One of the world’s best-known primatologists, de Waal is C. H. Candler professor of psychology and director of the Living Links Center at the Yerkes National Primate Research Center at Emory University. He has been elected to the National Academy of Sciences and the Royal Dutch Academy of Sciences. In 2007, Time selected him as one of the World’s 100 Most Influential People.

Be the first to review “Frans De Waal – Our Inner Ape” Cancel reply
Digital Delivery
We are using Paypal for our auto-payment gateway.
If you have any difficulty in settle your payment with us, please contact our Customer Service team via:
Skype: [email protected] (Intell Centre Customer Services)
Email: [email protected]
Facebook: https://www.facebook.com/IntellCentre/

NICABM – Working with the Pain of Abandonment