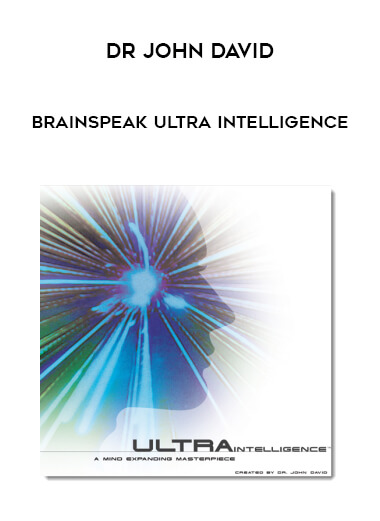 At BrainSpeak.com we know that our proprietary sounds and frequencies “speak” directly to the brain/mind, creating a biochemical response in the neurotransmitters of the brain.

Numerous case studies showed that these special tones and frequencies – when sent to pre-designated areas of the mind and body – can actually accelerate learning, eliminate self-sabotaging behaviors and strengthen the body’s immune system.

That is, the human brain can literally be “tuned” to far greater levels of performance.

Grab WBLI’s Accelerated Learning Masterpiece–Ultra Intelligence® at a Fraction of Its Original Price!

In a world where human technology has surpassed our ability to keep up with the sheer volume of information available, it’s no wonder that people everywhere are feeling overwhelmed, confused, out of balance and burned to a crisp.

The truth is that the human brain is not designed to be a short-term storage buffer for unlimited information. It was created to “think.”

Unfortunately with the overwhelming amount of information that comes at us each day, the untuned brain has very little capacity left for the process of actually thinking. We use the term “untuned” because many years ago a playful genius by the name of Dr. John-David discovered a powerful secret…

John-David was among an elite group of cutting-edge neuroscientists and educators who believed – long before the concept of “whole brain learning” was accepted by the mainstream – that the mind/body/spirit are harmonically interconnected and resonate, on a cellular level, to sound and vibration.

As John-David explained it, certain sounds and frequencies “speak” directly to the brain/mind, creating a biochemical response in the neurotransmitters of the brain.

His numerous case studies showed that these special tones and frequencies – when sent to pre-designated areas of the mind and body – can actually accelerate learning, eliminate self-sabotaging behaviors and strengthen the body’s immune system.

That is, he discovered that the human brain can literally be “tuned” to far greater levels of performance.

Today we know this to be true.

After 20 years of research and experimentation with sound patterns and tones played at varying frequencies, he created an audio program using unique vibratory patterns to stimulate the brain’s neurons and boost synaptic response.

This allowed listeners to achieve quantum breakthroughs in accelerated learning. He called this masterpiece ULTRA-INTELLIGENCE®!

Users of ULTRA-INTELLIGENCE® were absolutely blown away when they began to experience:

Editor’s Note: In my own experience, a surprising side-effect of using this program was a tremendously reduced reaction time in my tennis game. I felt like I was beginning to move to the next shot even before the ball was hit by my opponent. As an ex-tennis pro, this was the level of performance I only dreamed of when I was playing for money!

You may have heard that only 1000 people on the planet experienced the incredible power of Dr. John-David’s original ULTRA-INTELLIGENCE® program. Why? Because he created his highly-acclaimed program as a special Limited Edition, available only to graduates of his seminars and a privileged inner circle of friends and colleagues.

What you may not know is that it proved so effective that each willingly paid $1000 for the privilege of owning the coveted set of 4 audios and its accompanying video.

Today, we are offering you the re-mastered 2-CD/1-DVD set for the discounted price of only $247 (or only $197 for the downloadable version) instead of the original $1000.

This is an incredible opportunity to find out why so many others think ULTRA-INTELLIGENCE® is the most potent program of its kind in existence.

Before you decide, listen to what others have to say…

“I own one of the original 1000 sets…I was gradually transformed in so many ways…I became way more perceptive and knowing…can’t wait to listen again….yahoooo!”
Terri B.- Michigan
“Thank you very much. I have had John David’s (original) tape set since about 1989 and have always cherished it. After I found you on the internet and learned about Ultra – YES – I’ve wanted it and couldn’t afford it. Thank you sincerely for this discount. Make A Great Day”
Kent D. – North Carolina
Readmore about : Dr John David - Brainspeak Ultra Intelligence, Brainspeak Ultra Intelligence, definition of intelligence , intelligence types , genius iq
Reviews (0)

Be the first to review “Dr John David – Brainspeak Ultra Intelligence” Cancel reply
Digital Delivery
We are using Paypal for our auto-payment gateway.
If you have any difficulty in settle your payment with us, please contact our Customer Service team via:
Skype: [email protected] (Intell Centre Customer Services)
Email: [email protected]
Facebook: https://www.facebook.com/IntellCentre/