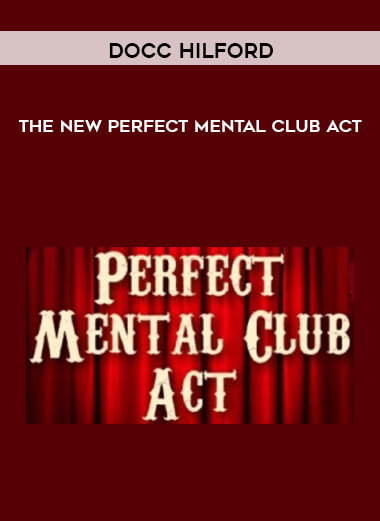 It’s the most practical, UNWRITTEN Q&A act possibly ever devised.
Docc has been performing it for YEARS, but it’s evolved into SOMETHING BRAND NEW!

The changes made to the original act that have come over 20 years and from many different professional mentalists, make this a totally NEW act, re-designed from the ground up for a contemporary audience.

Now you can perform a fast-paced mental show that grabs the audience and holds their attention. If you want to be working comedy clubs, night clubs, or the corporate circuit, this astounding act fills the bill. It is the act that keeps Docc Hilford working around the world.

Bascom Jones of Magick said, “This is the one true way to do a Q&A act!”

Richard Webster says, “This act should sell for $1000.00. There’s a living here for the wise performer.”

If you want to have a FUNNY, AMAZING and COMPELLING unwritten Q&A act that can be carried in one hand, requires no pre-show work or impression devices of any kind, produces startling hits and completely sells the audience on your abilities as a mind reader…

…YOU WANT THIS ACT.

•  I’m invariably mobbed by men and women seeking readings after he does this act.

•  Both comedy and drama are built in to the act.

•  From beginning to end, you are in complete control.

•  There are even pitches for your book and for readings worked into the script.

The NEW Perfect Mental Club Act revolutionizes the mental act, and makes it something people will really want to see. It’s commercial in the true sense of the word – people will pay to see it and like what they see.

•  PDF script of all the lines, reading and FULL ANSWERS TO QUESTIONS!

•  A full recording of the performed script.

AS A BONUS you get…

A READY TO PRINT – Back-of-the-Room sales book entitled,
TELLING FORTUNES BY CARDS that you will have the rights to print under YOUR NAME!
This full sized book is 104 pages and will show YOU as the author.

This is NOT the same old stuff rehashed and reworked.

WHAT IT IS:
Downloadable PDF, video and audio files

HOW ACCURATE OR COMPLETE THE BLURB IS:
It does leave out the key point that playing cards are used.  But this is definitely not a series of card effects.  The revelations made only verify the card that each participant has chosen and the script (and the instructional materials) make this very clear.  Though the cards are important to the routine, like billets, they become almost trivial and forgotten to the participants and audience.

WHAT’S NOT INCLUDED THAT YOU NEED OR NEED TO KNOW:
There is a little bit of one-time preparation involving scissors, glue, and/or writing, depending on the method you’d like to use.

JHEFF’S JUDGMENT:
When top professionals not only rave about a routine, but actually use it, it would be a good idea to not only take notice, but invest in such a routine.  This routine, which was revolutionary when first released more than twenty years ago and its new version is just as revolutionary, packs flat, plays big, and gets strong reactions.

Be the first to review “Docc Hilford – The NEW Perfect Mental Club Act” Cancel reply
Digital Delivery
We are using Paypal for our auto-payment gateway.
If you have any difficulty in settle your payment with us, please contact our Customer Service team via:
Skype: [email protected] (Intell Centre Customer Services)
Email: [email protected]
Facebook: https://www.facebook.com/IntellCentre/

After receive your order, It will take 0-12 hours to be download available.
The Course is digital products included PDFs,Videos (MP4,TS,AVI files), Audio (MP3,M4A), Document (Word, Exel,Power Point..)
We will provide the download link accordingly with the Email address on your “Order Reciep”.
Product Rating :
5 / 5 ( 3 votes )