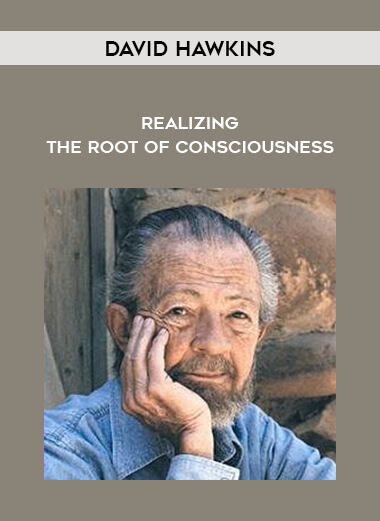 In this essential lecture, Dr. Hawkins discusses the time-honored tradition of the practice of meditation, which he informs us is actually our natural state. Instead of covering the numerous styles of meditation, he delves into the essence of the meditation process itself. He talks about how we can obtain the benefits of meditation without going through formal renunciation, where in the ordinary world this would not be possible. Dr. Hawkins explains two valuable ways of meditating which he experienced himself. He also tells us of the various ways to transcend the mind to become aware of the presence of God.

Sir David R. Hawkins, M.D., Ph.D. is a nationally renowned psychiatrist, physician, researcher, spiritual teacher and lecturer. The uniqueness of his contribution to humanity comes from the advanced state of spiritual awareness known as ” Enlightenment,” “Self Realization,” and “Unio Mystica.”Rarely, if ever, has this spiritual state occurred in the life of an accomplished scientist and physician. Therefore, Dr. Hawkins is uniquely qualified to present a spiritual path that is scientifically compelling to modern society. The classical hallmarks of this state are pristine awareness of Ultimate Reality, compassion for all beings, tireless dedication to alleviate suffering, radiant joy, and humor. People from all walks of life, nationalities, and spiritual orientations honor Dr. Hawkins as a teacher of advanced awareness, exemplified in the title “Rae Ryeong Seon Kak Tosa” (Foremost Teacher of the Way to Enlightenment) bestowed upon him in Korea. Founding Director of the Institute for Spiritual Research, Inc. (1983) and Founder of the Path of Devotional Nonduality (2003), Dr. Hawkins has lectured widely at such places as Westminster Abbey; Oxford Forum; Universities of Notre Dame, Michigan, Argentina, Fordham and Harvard; University of California (SF) Medical School; Institute of Noetic Sciences; and Agape Spiritual Center (Los Angeles). In addition, he has been an advisor to Catholic, Protestant, and Buddhist monasteries. He has conferred with foreign governments on international diplomacy and has been instrumental in resolving long standing conflicts that were major threats to world peace. He is featured in recent documentary films, magazines, and radio interviews (e.g., Oprah Radio and Institute of Noetic Sciences) for his work in the areas of health, healing, recovery, spirituality in modern life, consciousness research, and meditation. Dr. Hawkins entered the field of medicine to alleviate human pain and distress, and his work as a physician was pioneering. As Medical Director of the North Nassau Mental Health Center (1956 1980) and Director of Research at Brunswick Hospital (1968 1979) on Long Island, his clinic was the largest practice in the United States, including a suite of twenty five offices, two thousand outpatients, and several research laboratories. In 1973, he co authored the ground breaking work, Orthomolecular Psychiatry with Nobel Laureate chemist Linus Pauling, initiating a new field within psychiatry. His clinical breakthroughs brought appearances on The Today Show, The Barbara Walters Show and The Mcneil/Leher News Hour. In the 1970s, he co founded several psychiatric organizations, including the Editorial Board of the Journal of Schizophrenia and the Attitudinal Healing Center in New York. Many awards followed, such as The Huxley Award for the “Inestimable Contribution to the Alleviation of Human Suffering,” Physicians Recognition Award by the American Medical Association, 50 Year Distinguished Life Fellow by the American Psychiatric Association, the Orthomolecular Medicine Hall of Fame, and a nomination for the prestigious Templeton Prize that honors progress in Science and Religion. In 1995, in a ceremony officiated by the H.H. Prince Valdemar of Schaumburg Lippe at the San Anselmo Theological Seminary, he became a knight of the Sovereign Order of the Hospitaliers of St. John of Jerusalem (founded in 1077) in recognition of his contributions to humanity.

Be the first to review “David Hawkins – Realizing the Root of Consciousness” Cancel reply
Digital Delivery
We are using Paypal for our auto-payment gateway.
If you have any difficulty in settle your payment with us, please contact our Customer Service team via:
Skype: [email protected] (Intell Centre Customer Services)
Email: [email protected]
Facebook: https://www.facebook.com/IntellCentre/

NICABM – How to Work With Clients Who Are Stuck