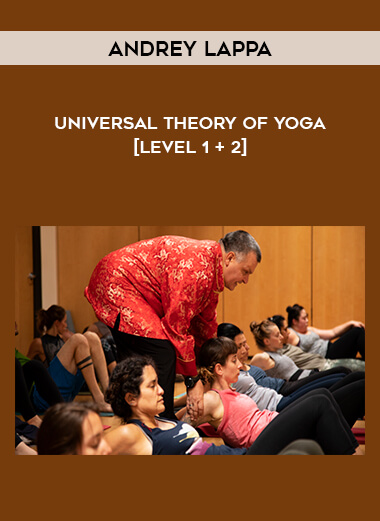 Universal Yoga is a systematic approach to spiritual evolution based on the key principles of classical yoga, creativity in practice and personal freedom. Andrey Lappa developed the Universal Yoga system after two decades of intensive study and practice with spiritual teachers throughout Asia. His theory lectures offer insightful and comprehensive knowledge and skills for harmonizing spiritual awakening through yoga with everyday life.

When Pranamaya released Andrey’s Level 1 box-set at the end of 2004, nothing like it had ever been done in the yoga world. Well, the depth and originality of Andrey’s insight into yoga practice opened a lot of eyes. Reviewer Richard Rosen placed the Level 1 box-set on his list of Top Ten Yoga Videos of All Time in the September 2006 issue of Yoga Journal.

Tim Noworyta of Yoga Chicago Magazine wrote, “Lappa’s Universal Theory of Yoga is amazingly thorough and comprehensive…He’s clearly someone who has gone deep into the heart of yoga and found insight, balance and inspiration.” But that was only Level 1 of Andrey’s program. The Universal Theory of Yoga Level 2 features the next installment of 24 hours of lectures. Once again these are the complete lectures from Andrey’s Advanced Studies program.

The Level 2 box-set will feature an in-depth exploration of Andrey’s universal system of sequencing, which is one of Andrey’s most innovative and remarkable contributions to the evolution of hatha yoga. Andrey focuses on how to use the elements of hatha yoga practice asanas, vinyasas, pranayamas, bandhas, mudras, etc. to create powerful and effective practice sequences to achieve any goal in yoga.

Lecture topics from this Level II lecture set include:
The universal parameters of hatha yoga
How to analyze any practice, style or school of yoga
Sequencing and its influence on states of consciousness
Multi-dimensional structures: how using the body to create patterns in three-dimensional space powerfully influences consciousness
Digital Balancing: how to create perfectly balanced sequences
Sequencing to compensate for daily activity
Partner Yoga
Tantric Partner Practices
Lesser-known practices, including the Yoga of Sleep
Yoga and Sex
Shamanism
The importance of a true teacher

Andrey Lappa is one of the most influential yoga masters of the post-Soviet countries. He has studied with teachers both famous and unknown, including BKS Iyengar and Sri K. Pattabhi Jois, and has practiced meditation in many monasteries and temples throughout the East. After many years of exploration into the most esoteric and challenging practices of yoga, Andrey developed the incomparably powerful and effective Universal Yoga, a comprehensive approach to spiritual evolution.

Andrey has taught yoga since 1988 and is president of the Kiev Yoga Federation in the Ukraine. Currently he conducts teacher training programs around the world and has re-introduced hatha yoga to the monks of his Tibetan Buddhist lineage in Nepal. He is the author of Yoga:Tradition of Unification.

Be the first to review “Andrey Lappa – Universal Theory of Yoga [Level 1 + 2]” Cancel reply
Digital Delivery
We are using Paypal for our auto-payment gateway.
If you have any difficulty in settle your payment with us, please contact our Customer Service team via:
Skype: [email protected] (Intell Centre Customer Services)
Email: [email protected]
Facebook: https://www.facebook.com/IntellCentre/